If you know me, I’m not a big Indian (Asia, not Native American) cuisine aficionado. I don’t eat Indian food but once every 5 years. That’s how little I eat Indian food. Not that I hate it but I don’t crave Indian food very much.

However, a friend of mine wanted to celebrate a big occasion with a meal at an Indian restaurant and their choice for the celebratory meal was Aroma’s in Benicia. Benicia, California is a small town in Solano County near the Napa Valley and is a sister city to Vallejo, California. A little fun fact – Benicia used to be the state capitol of California and it was for 13 months in the 1800’s according to

Aroma is located in the historic part of Benicia on First Street. First Street is filled with local shops and eateries. It’s a nice place to take a stroll on a sunny afternoon and if you walk all the way at the end, you end up at Benicia Point which juts into the Carquinez Strait.

Back to Aroma. We went during lunch on a Saturday and it was not busy at all. I was a little worried because that usually means the food isn’t good but my friend recommended it so I trusted their judgment. The interior decor is pretty nice and clean. Tibetan and Indian artwork is scattered around the restaurant. A statue of the Hindu god Ganesha has its own spot perched in its shrine, too.

The service at Aroma was pretty good and that’s to be expected being that we were the only group dining at the time. For appetizers we ordered the assorted naan and chutney. Naan and chutney is pretty much flatbread and sauces. The garlic and plain naan were very good with the chutney. Mango and tamarind chutney are the sweet ones of the three. I forgot what the 3rd chutney was, but it was herby and green. The third type of naan in the assortment was the onion which to me was ok. Not bad, but not great tasting.

We also tried the Chicken Biryani for an appetizer and that was a delightful surprise. All of us said that we could have just had that and some naan and we’d be sated for the afternoon. It’s just the right size for a single serving that one could just have that for their meal. It’s flavorful and pretty hearty. We got it in MILD spicyness. 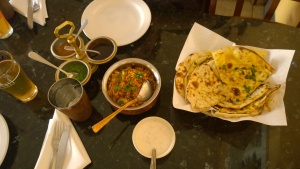 For my main dish, I had the Chicken Tikka Masala and the level of spice – HOT. There’s one more level above that – EXTRA HOT. I love spicy. I put Sriracha in my pho until the soup is bright red and for those of you who know, even light orange is spicy for a lot of people. HOT at Aroma is probably the top of my spicy tolerance meter but it was excellent with the side of long grain rice. It came with some white sauce – I don’t remember what it was but it added a subtle creamy taste to the Masala. It was pretty good. I still rank the Chicken Biryani higher than the Masala but I would eat them both now that I’ve had them.

Personally, I would come back if I ever craved Indian or if someone were to ask me to go there. My wife has developed a palate for Indian food so I would definitely come here if she were to develop a sudden desire to chow down on good Indian cooking. Check it out iif you’re in the Benicia-Vallejo area. The stroll down First Street will be a nice addition to your visit.

OH! They have a buffet for around $10 if you ever come during those times. I certainly will try to make it in one day and try all that Aroma’s buffet has to offer and maybe I, too, will develop a taste for Indian food!

Craving Japanese cuisine? How about Hawaiian? How about both? In the Benicia/Vallejo area? Yes you can have both at Ali’i Sushi and BBQ. Just off the 780 freeway and in the city of Benicia, Ali’i offers residents and visitors to Solano County, Benicia, and Vallejo areas a taste of the Hawaiian islands and Japan in one place.

When you walk in you know it’s going to be home cooked good food. We had a chance to try this place out and we were not disappointed. Our big family was hungry and some of us wanted Japanese while some wanted Hawaiian (namely a Loco Moco). It’s a good thing my wife quickly got on her Windows Phone (yes, we have Windows Phones!) and Yelp’ed for some Hawaiian/Japanese food and found Ali’i.

If you want in and out fast food, forget it. Not here. You have to remember you’re visiting the islands when you come to Ali’i. That means leisurely pace. That means take your time. Everything is chill. Just like the islands. Some people take that as a negative, but if you’ve ever taken a trip to Hawaii, you will appreciate the non-hectic mood of Ali’i.

The first thing that hit me was the price of the Loco Moco. It as posted on a whiteboard. $9.95! Now if you’ve had a loco moco at another franchised Hawaiian joint, you know that $9.95 is pretty pricey for that meal. For Ali’i though, that price is worth it. You get one huge hand prepared beef patty. I mean huge enough that 3 of our kids were able to share it and not finish! The meat was nicely seasoned and the rice serving was large. My wife and I could’ve shared it and not been able to finish. That’s how big it was. Granted we aren’t big eaters but still.

We also had the Ahi Poke and boy it was good. Just the right amount of flavor and a little kick of spice. Large chunks of ahi too. That went super fast and was gone within a couple minutes. No complaints although the lighting made the fish look a little grayish. Not to worry though, the fish tasted fresh. Not sure if it’s the fluorescent lighting or the ambient color of the restaurant. We also shared a dragon roll. The dragon roll is one of our family’s favorites. We order whenever we go out for sushi and their dragon roll is top notch. The flavor and texture was well-mated and delicious.

I had the chicken kara age with shrimp tempura. It’s one of my go to dishes at Japanese restaurants and it was among the best. The chicken was seasoned just right, crispy, and well made. The shrimp tempura was great, I’d say the best I’ve had in a while. The batter wasn’t too thick and the shrimp was a pretty good size.

My wife had the kara age’s cousin, the tonkatsu and shrimp tempura. My son had the chicken teriyaki and the chicken was chargrilled with the charred corners and edges which my son likes. It didn’t look precooked either. I have to say that I believe all the meals were pretty much made to order. It took a little longer, sure, but the food was well worth it.

I really enjoyed the food and the homey feel of the place and I know we will be going there again. Please support this family run restaurant if your ever in the Benicia-Vallejo area if you’re in the mood for good Hawaiian and Japanese cooking.

Blue Rocks Springs Golf Course is a municipal course in Solano County in the city of Vallejo. I’ve played several times there over the last several years. This is also the very first 18 hole golf course I ever played.

Located off of Columbus Parkway on the Benicia side of Vallejo, Blue Rock Springs G.C. offers a decent golfer venue at a reasonable price. Golf carts are available and for the East course, it is highly recommended as it is fairly hilly. There are two courses at Blue Rock simply named the East and West courses and both play very nicely for the recreational and beginner golfer. It’s got some challenging holes on both sides with doglegs and water holes as well so it’s fun enough for more serious golfers. The rough isn’t too crazy as most public courses tend to have them which for me, makes it more fun to play anyway. And most fairways are forgiving that if you slice or hook a little, you’ll still have a playable ball for your next shot.

I’m not a devout golfer and only play maybe 4 to 6 times a year if I’m lucky especially since I’ve got five kids now. A busy family life makes sure I don’t get out to the golf course too often but I am hitting the range more often nowadays though. It’s fun to take the kids along with me to hit some golf balls down the range. So take this post as an amateur’s review of a golf course he’s played maybe a dozen times throughout the last decade.

The West course is a little flatter and if you intend to walk, then this is the easier of the two to walk on. The East course is more difficult with more hills and built an the foothill of a small mountain (or big hill) and offers nice views on some holes. This course gave me my very first birdie on one of the par 3s.

The driving range is nice with plenty of stalls and I never seem to have any trouble finding a stall even on weekends. Sometimes I can find 3 next to each other if the kids are with me. It doesn’t have a sand or a real pitching green though which would make it a pretty top notch municipal golf course. But even with that missing, it’s still a good place to practice and play if your nearby in one of the surrounding cities like American Canyon or Benicia.